GloverPriest are delighted to support Paul, with nother success story from the midlands, representing his country. We are now delighted to report that Paul and the England squad were silver medallists in the tournament. An amazing effort! 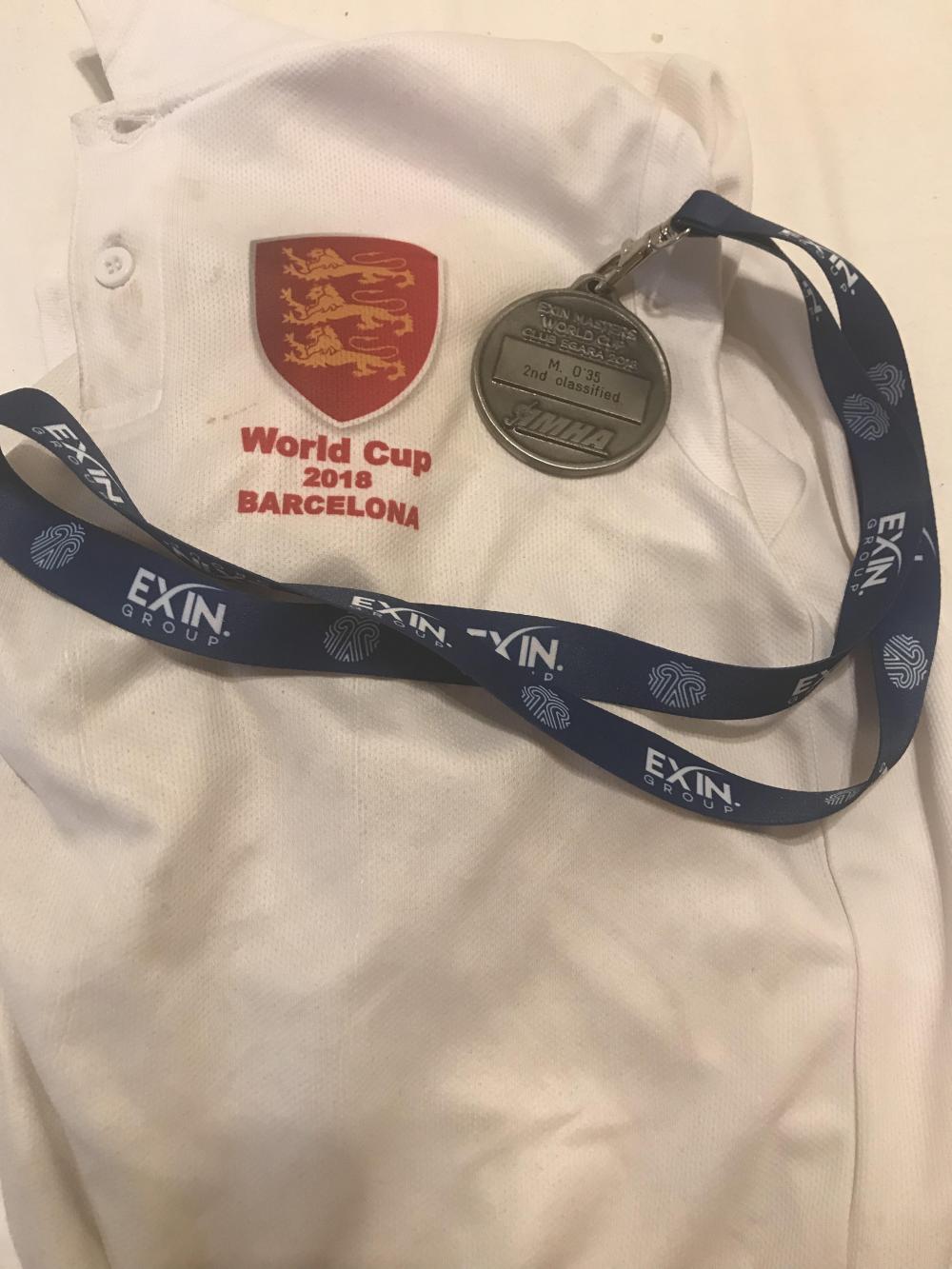 A few weeks ago, we looked at Paul Nixon's selection for the England Over 35's Hockey Squad that was off to Spain to compete in the EXIN Masters Hockey World Cup.

As one of the leading law companies in The Midlands, GloverPriest is delighted to support Paul - another success story from this region - in representing his country. And we are now delighted to report that Paul and the England squad were silver medallists in the tournament - an amazing effort!

The competition was based on a group of seven teams: England, Australia, Wales, Scotland, South Africa, Spain, and Germany, and was played in Club Egara, Terrassa, in Spain. It was the largest International hockey tournament the world has seen to date, with 132 teams from 24 different countries competing, and around 3.000 athletes taking part in close to 400 matches.

"The opening/closing ceremonies gave a true idea of the enormity of the World Cup", commented Paul, "and also from the volume of people that attended the tournament in Spain. It also highlighted a real festival feeling and the social aspect of hockey, which is something that endeared me to the sport and a main reason why I've chose to play hockey for over 25 years - and why I shall continue to play for as long as possible."

There's no greater feeling for a sportsperson that pulling on their national shirt, something Paul readily agrees with.

"Yes, it was an amazing feeling, particularly having the opportunity to sing the national anthem in a World Cup Final in front family and friends - a truly emotional experience. The bottom lip was going when I spotted a good mate amongst a group of Australian supporters, recording the occasion on his phone!"

England, and Paul, had plenty of support over in Spain. Paul's wife Anna was there with their children - Bobby and Penelope - so not only did they support Paul and his team mates at the games, but "they also enjoyed it as a holiday too, as I was often away for long periods during the day. It was difficult at times, but family and friends who came out also made this a whole lot easier. And it was great to see Gavin and Lee from GloverPriest flying out for the Wales game, too. The company's support means a lot to me!".

{IMAGE: Squad / paul 4} All seven teams in the group played each other once, with the top two teams meeting in the final. The first two games were against Scotland and Wales, and as Paul stated "the team were confident playing these games to open the tournament as we had convincingly beaten both sides in the Home Nations Tournament a month prior to the World Cup". And whilst England were made to work hard in both games, they started started the competition well with two wins: 3-0 and 6-0 respectively.

But a sterner test was to come in game three, where they were up against host nation Spain - with a midday kick off, in 40 degree heat in the 1992 Olympic Stadium! But Paul and the lads were in superb form and romped to a comfortable 5-0 win before defeating South Africa 4-0 in a game that was streamed live via YouTube.

"It was a great start to the tournament", remarked Paul before adding "but it was tiring so we were really glad of the two day rest that followed prior to taking on Australia, who were also unbeaten."

Unfortunately, the England team "underperformed" against an excellent Australian team, although they remained in the game for long spells. Defeat meant that the final game of their six group matches was a do-or-die affair, against Germany. Paul takes up the story...

"The Australia game was a tough defeat to take as the loss meant our final group game against Germany was effectively a World Cup Semi-Final with the winner progressing to the Final".

As we all know, Semi-Finals again Germany don't tend to end too well for English teams, but not this one. A tense game finished 1-1, so it was England who went through to the Final as they only needed to avoid defeat, with Paul close to opening his goal scoring account with a half volley which the keeper somehow tipped around the post.

"We completely dominated the game without managing to put it away after taking the lead with about ten minutes to go", commented Paul. "This meant Germany had to score twice... they equalised with a few minutes left but it was too little too late - England had qualified for the World Cup Final!"

There aren't too many English sportsmen who can say that last sentence, are there?

So, it was Australia in the final, and it was a real closely contested game between two evenly matched teams. It was a game of very few chances, but unfortunately Australia converted a scrappy opportunity early in the game and England were unable to get back on level terms.

Gracious in defeat, Paul admitted that "Australia were by far the best side we came up against. Professional, well-organised, physical and fit, they were a very strong outfit, but one we matched. However, whilst we were disappointed in defeat the best team on the day won the gold."

So, what are Paul's memories of the World Cup and playing for England?

"It was a rollercoaster of emotions - from nervous excitement during our open games to complete elation against Germany, and from sheer pride during the national anthem in the final to disappointment against Australia.

Whilst gold would have been amazing, I got an enormous sense of achievement standing there accepting my medal and I couldn't have asked for a better group of team mates, too. Some great characters and memories, but it's a shame that this group of players are unlikely to play together again - but still, I got so many great memories to take away."

England team coach Ian Jennings MBE, paid a glowing tribute to Paul when he stated that his "work rate was outstanding and his discipline exemplary. He should feel very proud of his contribution to the team and there is no doubt that we have laid down the foundation for others to follow and you have been a very proactive part of that."

Lovely words, and when I asked Paul about one of his favourite moments of the World Cup, it's typical of someone who puts the team first when he answered, "a full-bloodied challenge with twenty seconds to go against Germany and clearing the ball to safety as it meant the team got to the Final - a great memory".

Paul has now returned to The Midlands, playing for Leek Hockey Club with an appetite for more international appearances whetted by playing for his country at the World Cup and by the Over 40's winning their World Cup.

Paul Nixon was "privileged to have been part of such a great tournament, and getting a silver medal". At GloverPriest, we are also privileged: privileged to support Paul and his part in making English hockey history.